As I prepare my next newspaper article, I am reflecting on the events of the past weekend. Mission 22 held a car rally in New Hampshire. First, let me explain the organization of “Mission 22”. It is an organization that has a mission of stopping veteran suicides. It uses a multifaceted approach focusing on mental and physical intervention on combating the terrible effects of PTSD (Post Traumatic Stress Disorder) and TBI (Traumatic Brain Injury). We, as a country and a people, need to do everything we can to minimize the awful effects of war on our returning soldiers.

So this event alone raised thousands of dollars so Mission 22 can offer help to soldiers who need it. This can be conventional psychological intervention, newer medical intervention, and even outdoor educational family therapy. This is such a new field and we are learning new things every day. We owe it to those who protect us, to protect them.

There are many philanthropists who truly want to help society. This, despite the impression certain political figures impose. These businessmen donated big dollars to have their Lamborghinis, McLarens, Lotus’, and other very expensive sports cars decorated with the Mission 22 label and paraded through New Hampshire from Nashua to the White Mountains. Many are veterans themselves. All of them have been touched by those who served.

Picture 180 of the most expensive cars produced gathering at a dealership in southern New Hampshire and you have a depiction of Porsche Nashua dealership. Just getting all these cars in one place was a feat. And it was another feat to get this group as a collective unit up I 93, ninety miles to the track in Tamworth, NH. With much help from local and state law enforcement so began the trek on Friday, July 20, 2019. 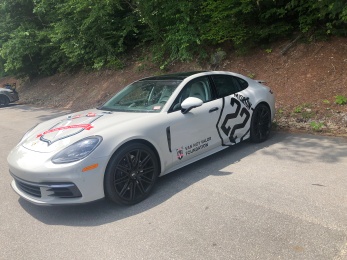 The weather was great, almost too hot. Temperatures approached 100. Metaphorically speaking, it was fitting; some of the hottest cars out in New Hampshire on one of its hottest days ever. It is difficult to put in words this demonstration of congeniality and passion to help out an organization that is so appreciative. So began the 4th annual Mission 22 Car Rally.

After displays and track running at Motorsports in Tamworth, the group met for dinner at the Covered Bridge Restaurant. Parking 180 exotic cars was a blast! As one 15 year old volunteer said, “It is kind of a power trip telling millionaires where to park their Lamborghini!”

Saturday was some of the same at the track in Tamworth; cars displayed, vender tents selling, good food available, and conversations with the owners and their families. This day was different though. The owners gave veterans rides in their cars on the track! Motoring at speeds of up to 180, it was a thrill for the ladies and gentleman who put their lives on the line in Korea, Vietnam, Iraq, Afghanistan, and other dangerous hotspots. A big “thank you” to those who are and have served; and a big “thank you” to those who recognize the sacrifices of these soldiers and their families. The activities accumulated with a night of celebrating at Waterville Estates …and one of the best fireworks display ever witnessed. 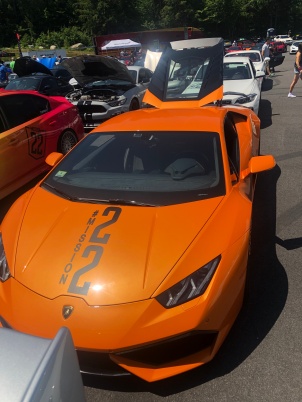